This book is amazing. Is the perfect blend of romance, mystery and thriller. The writing is flawless and mature and had me hooked from the prologue until the epilogue. There isn't a dull moment in this and I finished it in one evening, sleepless night and all. I hope more people know about this amazing book, it definitely deserves more recognition.

The cover is a bit misleading as both the main characters are suppose to be in their 30s. The setting of the book is about the subterranean culture below New York City and I am amaze with the blend of facts and fictions revolving the underground community. I did a google to assure myself that some of these are indeed real. 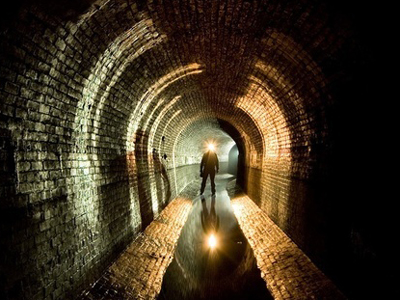 Lindsay only surviving family member, Seline had gone missing after her recent trip to the underground tunnel for her research. After failing to get additional help from the police force, she ended up reunited with her high school crush, Jake Cole. He is deemed the ultimate urban spelunker and had quite a reputation in the academic field. But when she met him, he is living in a dingy basement with a black drifter, Reggie and appear to be at his lowest point of his life.

'Her teenage crush had turned into a brooding stranger, yet he still fascinated her, filling her heart with a cacophony of emotions.'

Jake Coleman had been fascinated with the underground since young and had dedicated his life and career into understanding the subterranean culture across the globe. But his last mission to the New York underground had left him captured and trapped below ground for two years. It had left him broken and scarred. We had some flashback scene on the tortured he had endured at the hands of The Moles.

I'm glad that we have dual POVs from both Lindsay and Jake because without it Jake will just appear as a brooding asshole most of the time. From his POV, I feels his vulnerability and insecurity due his past ordeal. Is lucky for him to still be sane despite some of his awful memories. He had some self loathing going on there, he felt worthless and disgusted with himself, but we know he is more of a man than anyone will ever be. He is honorable and selfless, he make sacrifices for his friend without a blink of an eye.

"You think if you ask enough questions you'll figure me out and fix me. Only what happens if you can't? You'll have taken me apart and left me in pieces, and I'm already broken without you making more of a mess."

The mystery surrounding Jake's past and Seline's current disappearance weave together perfectly. It kept me on the edge of my seat to find out all the missing puzzle. By half of the book, we were given a lot of explanation about what is happening and I wondered what is yet to come. Of course, things isn't as simple as it seem and large thing is at play. There are some twist and turn that keep us engage.

Reggie, Jake's best friend is such an endearing character, he is like the gentle giant. They both had a strong friendship built from overcoming life and death together. Reggie brings some fun and light moments in this otherwise a dark and gloomy setting.

Not only that Jake was quite an enigma in this book, the heroine Lindsay is absolutely amazing. Is a rare occasion that I had such a strong feeling for the heroine. You know, some author wants to make the heroine appear kickass and independent by making her contradicting and questioning everything that the hero said, sometimes that is very annoying. Lindsay is a very mature character, she knows when to listen, when to follow and never tried to question Jake's expertise. She is so patience in dealing with Jake because she understands him. At the same time, she isn't a doormat either. I like how she will put him in his place when he tested her patience too far. She will take charge when he appear indecisive. These two have an amazing chemistry together.

For such a serious tone of the book, the romantic in me didn't expect to be much smut here, but I was surprised. In the beginning there are some unrequited love and sexual tension between these two. Lindsay had a successful career and everything going in her life, while Jake is living like a bum. But these two had been having a crush on each other since they were young. I just can't wait for them to pour their soul out and get it going. There are also two sex scenes that were told in quite an explicit details,much to my absolute enjoyment.

"-a gorgeous, half-naked man was in the next room, sending off more mixed signals than a broken traffic light."

Despite being Book 1 of a series, the ending doesn't left us hanging. Things are pretty much resolve, but we know there are more that yet to come. I'm so desperate for Jake and Lindsay's HEA that we are treated to a HEA for now with is sweet and touching. It left me feeling anxious to read the next book because all I want is for Jake to be safe, happy and content with his life. He deserves this.

He turned to her and the sun glowed warm on his face. "Because she burns so bright. Better than anything I could ever imagine."
Tweet