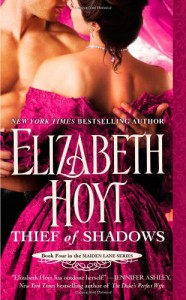 Okay,I didn't read the first 3 books of Maiden Lane, even though many had been gushing about Mickey, because I'm not THAT attracted to pirate. The historical romance is often about reformed rake, which I'm getting bored at. So what drew me to 'Thief of Shadows' is because Winter Makepeace is not a rake. He's a virgin! Oh my. Winter Makepeace,who is a schoolmaster by day and disguise himself at night to 'right the wrong', gave me a Batman persona. Swoon. I had no idea what's up with the title 'Thief of Shadow', because the hero is not even a thief.

On the other hand, the heroin, Isabel is a widowed baroness. She even had a few lovers before. She might appeared shallow because she indulge in the materialistic, whereby Winter live a very modest life caring for the orphans. But I can understand that because she grew up in a different environment.

The mystery behind the missing children didn't intrigue me much because I love to read about Winter and Isabel more. Winter Makepeace is one of the most selfless hero I had read in romance novel so far, beside of Rainwater by Sandra Brown. They are the kind who can sacrifice themselves to make the world a better place. We definitely need more of them.