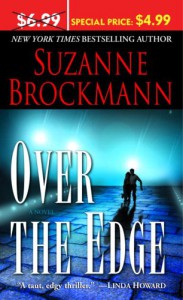 This is the third book revolving around the elite SEAL Team 16 Troubleshooter squad. I haven't got around to read the prior two book yet, because the Chief Stanley Wolchonok's character caught my interest and I directly jump to Book 3. In order to develop up the characters for her upcoming book in the series, Brockmann included a few subplot on secondary character such a Ken Kamody, Sam Starrett and Mike Muldoon.

Chief Stanley Wolchonok aka 'Stan' had a reputation of being the fixer of all problems for the squad and had always admire helicopter pilot Teri Howe from afar. One day, he witnessed Teri being sexually harassed by her officer, he offered to help her out by requesting for her service for his training op to get her away from the officer. However, the training op turned into a real life takedown of a group of terrorist that had hijacked a commercial airplane with hostages. Stan felt sorry that he had dragged Teri into this deadly mission and offered to fly her back to the base, but Teri was determined to stay.

The large part of the story dwell on the squad plotting and training for the takedown, while the negotiation with the terrorist was ongoing, by FBI Max Bhagat. The plane that got hijacked was believed to have the Senator's daughter onboard, only that she didn't make the flight. In order to stop the terrorist from harming more hostages, Gina Vitagliano step in to give herself up as the senator's daughter. She acted as the tool to negotiate with the FBI for the terrorist. They wanted their leader who was imprisoned to be release.

In the meantime, Stan noticed Teri nervousness and inability to protect herself when being pursue by aggressive man. The funny part is when Stan trying to ask his buddies into role-playing to harass Teri, so that she get to practise how to response. Stan even tried to set up his friend Mike Muldoon to date Teri because he believed she need a man to protect her, while all this time he had feeling for her himself.

Teri was furious and embarrassed when she found out that Stan was setting her up with Mike. She wonder why Stan only treat her as a woman who needs him to look after like a little sister. When she finally confronted Stan about his motive, he gave in and admitted his feeling for her.

Meanwhile, Gina ended up getting rape by the terrorist after they found out she was assisting the FBI. Max got really emotional and decided to initiate the takedown by the SEAL team. At this time, Teri Howe received intelligence that there was a suicide bomber in the plane and the SEAL team will be in danger along with the hostages. Teri flew to the scene and Stan together with the bomb that he retrieved boarded the chopper to throw it into the sea.

I laughed in front of the book when Stan came up with such crazy ideas of role-playing with Teri and keep pushing Mike towards her. He kept planting the idea of Teri is such a great woman in Mike's mind. It might seem asinine to hear this, but Stan actually felt he was doing everything that's best for her. The romance plot is different from all the other generic plot that I had read before. The subplot about Sam and Alyssa is interesting as well. I'm sure we will get more on Sam in the future book.
Tweet