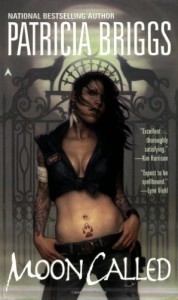 I finally got around reading Mercy Thompson series, which every UF fans had read. Mercy, a skinwalker who shift into a coyote, is a mechanic living next to her neighbour, Adam, the Alpha werewolf. Initially, the way Mercy describe him, he sounds like a grumpy old man. But he is anything, but a grumpy old man. He is an alpha, but not the brooding and arrogant kind. He seems to exude a pleasant charisma.

It started of with a new wolf, Mac, seeking shelter and job at Mercy's shop. When Mac got confronted by humans and wolves who were hunting him, Mercy seek Adam to help Mac. From the way Mercy keep assuring Mac that Adam will solve all his problems, we see that she really respect and trust Adam, although she doesn't submit to his authority. Anyhow, things didn't goes as smooth, Mac ended up dead at her doorstep and Adam was severely wounded and his daughter, Jesse was kidnapped.

Worrying who she could trust, she brought Adam to Bran's (Alpha of the Alpha wolf). There we were introduce to her ex-boyfriend, Samuel, Bran's son. When she was 16, she nearly elope with Samuel, but after knowing the reason he wanted to be with her, Mercy left the pack instead. We learned that Samuel loves children very much, but most of his child didn't survive the birth or the Change. Therefore, he needs Mercy to be his mate, so his future children can survive . With the current situation, she needs Samuel help to save Adam's daughter. Samuel gave me a distinct feeling as the annoying old flame that keep looking for a leeway to get back to Mercy good grace.

The supporting characters include, Adam's third, Warren and his human gay partner, Kyle and Stefan, the vampire. It seems like Mercy had friends from all walks of life..... and dead.

Among all the other UF series that I had read, the characters here is the most mature. Mercy do not act on impulse, she think things through and weight the consequences of her action. Although, she hate to submit to the wolves, she knows sometimes keeping her mouth shut is better than confronting the beast. She knows when to fight and when to back away. Overall, a great first book and we got introduce to this world of Mercy Thompson. Can't wait to read the next book. In the end, we were told that Mercy went on a date with Adam, but then Samuel move in to become her roommate. Hmm... I hate love triangle. But I got a feeling Adam gonna win.
Tweet