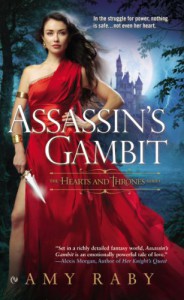 I can't believe that this is Amy Raby's debut. Although some reviewer said this book don't really fit into the romance genre because majority of the the plot was about politics and war, I'm very invested in Vitala and Lucien's relationship and hope they get their well deserve HEA.

For those who wanted to know how much romance is in this book, I will said that both Vitala and Lucien are practically together since the beginning until the end. They seldom separated from each other. In the beginning they are wary about each other identity, but when the truth is out, they embrace it and work together to accomplish a similar goal. Romance author usually use thick sexual tension, unrequited love, big misunderstanding, big revelation that turn a jerk hero into someone you swoon after or lust turn into love to make the story works. But Amy Raby uses non of those. What makes me finish reading the book in one day is the non stop action plot. You just can't wait to see what will happen next to Vitala or Lucien.

Vitala is a Riorcan, but looks like a Kjall because she is a half breed. She was trained as an assassin by the Obsidian Circle to overthrow Emperor Lucien in order to free Riorcan from Kjall ruling since she was eight. I like the fact that although she was trained since young, she know her mission is to free Riorcan and she didn't got brainwash to kill mercilessly or follow any orders blindly. Most of the time she make her own judgement for the goods of the Riorcan people.

Lucien, the Emperor of Kjall is a handicap, who lost his left leg in a battle. Both his elder brother are dead and he only left with a 13 years old sister, Celeste. Although he is handicap, he doesn't appear brooding, but rather friendly and charming at first glance. During the first half, he seems like beta hero, who needs his ass save by the heroin, basically got drag across the country and totally under her mercy. However, as usual beta heroes have genius mind and so do Lucien. At the second half, we can see he is a great strategist and a great leader. He can raise an army for a war. Although there is a mentioned that he is only 22 years old, but honestly, his action is so mature for his age that I thought he can easily be a decade or two older. I like the fact that he is willing to put any pride aside to ally with his enemies.

The story begins with Vitala being summoned to the palace after winning the annual Caturanga game (I just imagine is chess). Emperor Lucien loves the game and every year he will invite the winner to play with him. This is the first time a female won and she even beat him. All she need to do is the get Lucien in bed and kill him while he is distracted. This is because Lucien is a warmage that can anticipate an attack before it happen.

However, before Vitala manage to make her move on Lucien, both of them got entangle in a coup to overthrown the Emperor lead by the Kjall's traitor. Rather than watch Lucien got kidnap or killed, Vitala decide to save him instead. She make him promise that if she help him to get his throne back, he will free Riorcan. While Lucien is recovering from his injuries in Tasox, they met two midwives and a dog name, Flavia. Vitala then lead Lucien towards the Riorcan's land and at this moment Lucien had finally guess that she is from the Obsidian Circle. Anyway, he had no other choices than to follow her and hope to gain ally with the Circle.

Things doesn't turn out as what Vitala had anticipated, instead of the Circle working together with Lucien, they held him prisoner. She had no choice but to break him out. I love the following quote from Vitala about Lucien.

"She loved that about Lucien, that he accepted new situations instantly and did not ask idiot questions like 'What's going on?' or 'What are you doing here?'"

Many times we see hero and heroin really asked those idiot questions that make me roll my eyes. How true is that. Whenever Vitala appeared to save Lucien, he just grab his crutch and ran with her.

At the second half of the story, Vitala had left the Circle, while she is at lost of where she belongs, Lucien met up with his While Eagle battalion and tried to raise an army of rebel. Vitala was trained to assassinate, and now she is feeling restless with all the inaction because she doesn't know how to help Lucien with his plotting. When Lucien order to have her evacuated away from danger, she takes matter in her own hand.

Of course, in the midst of all the political agenda between Kjall and Riorcan, the relationship between Vitala and Lucien got closer. He even proposed to her with a Caturanga's piece. They are both flawed characters with a haunted past. Lucien had a phobia towards anything lemon because it reminds him of the day when he lost his leg, while Vitala practically had nightmare about one of her earlier kill whenever she engage in sex act. Lucien patience towards her is quite unbelievable, maybe the fact that she saved his life count towards it. But anyhow, the brilliant guy can solve any problems that come in his way.

Initially I'm worried about a possible cliffhanger since this is book 1, but fear not. This is practically a standalone with a HEA. The next book is about Rhianne, Lucien's cousin, who already married with her husband in Assassin's Gambit. It seems like the author is going backwards and talk about how she met her husband.
Tweet