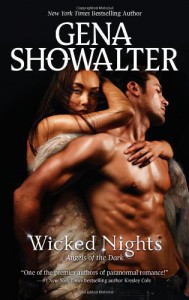 First off, I never read LOTU series before and yet I have no problem understanding the world building here. It surprises me that this book had a very convincing plot and strong secondary character because from the cover I expected strong focus on the romance and mostly smut.

Annabella, the heroine was locked in an institute for the criminally insane when four years ago, she watched her parents killed by a demon and then she got framed for the murder instead. No one will believe her story of monster killing her parents, including her own brother. While she is in the asylum, she had to endure being abused by the doctor and handlers. But despite all the awful things that happen to her, it does not break her spirit. When one fine day, an angel appear in her lockup, she seize the chance that he might be able to save her from the hell hole.

Zacharel, our hero is one soft-hearted person (oh, I'm sure he hate that) despite appearing all caveman from the start. From what I understand, he got demoted to handle a group of angel outcast, which include Koldo, the wingless angel and the troublesome trio Thane, Xerxes and Bjourn. I can imagine these guys are a handful to handle. The instruction from the Deity for Zacharel is clear that they had to fight the demons without harming any humans. Zacharel wouldn't care about the weak human, but if any of his people killed a human, Zacharel will be punish. That is incentive enough to keep him in line.

When Zacharel stumble across Annabella at the asylum and he decided to save her from her demise, he didn't expect to be hunted by the demon lord, Unforgiveness. The demons had the ability to track down Annabella no matter where she is and Zacharel ended up have to protect her. Our dear Zacharel also had been carrying a big guilt of killing his twin brother, Hadrenial and we can see that he misses him deeply.

The cover and the storyline gave the feeling of being dark, gloomy and all serious, but there are many humorous scene in the book, especially the interaction between Annabella and Zacharel. That man seems to be living under the rock despite his thousand years of age. First off, he is a virgin (Oh my), he had never been kiss and never eaten a cookie. I can't imagine that no other woman had tried to seduce him prior this. Annabella couldn't help but wanted to teach him the finer things of enjoying life. I remember a scene where Annabella commented that his wings are pretty, but Zacharel thinks that his wings are more than pretty, they are magnificient. Many times I wanted smack him or roll my eyes at some of the things that the man said. Anyway, is damn hilarious.

Gena gives us a very nice twist towards the end that I totally didn't see it coming. There are a lot of questioned being answered like for example why is Annabella being targeted by the demon for start. I would have appreciate Zacharel being more kickass and engage more in the final battle, but since he is such a sweetie to Annabella and seems like a perfect romantic hero, I let it pass and able to enjoy this book really much. I'm now considering picking up the LOTU series as well.