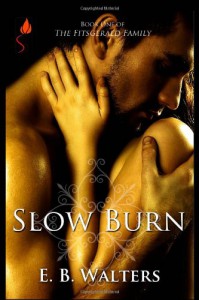 This is an entertaining romantic suspense that gives me a feeling that I was actually watching a suspense movie. Two likeable leads, fleshed out villains, great supporting characters and an engaging suspense that kept you guessing.

Our heroin, Ashley, lost both her parents ten years ago in a fire in Carlyle House. She was there at the scene, but couldn't recall what she witness during that night. One day, when a man wanted to hire her to paint for his grandmother, she came face to face with Ronald Noble, the son of the fire-fighter who was killed trying to save her parents. Ron needs her help to uncover the truth behind the tragedy that killed their parents. Although, she didn't want to revisit the awful memories, she reluctantly agrees after being persuaded by his insistence.

Ron Noble had been living with the rumours of his father being the arsonist behind the fire for ten years. When he started receiving anonymous letters pointing him to investigate the fire, he engaged his PI pal, Kenny for help. Ashley name happened to appeared in the letter as well, that's when he decided he needs to seek her out.

Someone wants Ron to uncover the truth, but at the same time someone also wants to silence all the witness. Ashley's Uncle Kirkland, who happened to be her parents' lawyer is the first person who got targeted. After he was attacked and lying in coma, Ashley worried that someone is out to get her. Meanwhile, Ron suspect that his family, which include his mother, grandmother and uncle are hiding some family secrets from him. When one by one, the people involved in the incident got attacked or went missing, Ron and Ashley were desperate to jog her memories by going for hypnotising.

Ashley and Ron have this connection from their first encounter, probably due to their shared past of losing their parents in the same tragedy. Their first meeting started off in an awkward situation where Ashley mistaken Ron as her model for her erotic series. Ron is kind of shameless when it comes to taking advantage of opportunities present to him. He is so sure of himself, confident and a little cocky, but a cool-headed person he is not. Most of the time, he is easily riled up and can't keep his emotion in check. I like seeing him all angry and snappy. But what I like most about him is he readily admit his wrong doings.

Usually in standalone book, I enjoyed reading how the leads getting together. But in Slow Burn, I find myself enjoying it more after they are together. I love their easy banter and how Ashley wanted to smack Ron when he was out of line. Some of the Fitzgerald family members made some brief appearance, but they didn't came out to steal the show. There isn't a specific character that I am rooting to read about, beside Ron's PI pal, Kenny. That guy really did made an impression on me. All in all, this is one entertaining read and I plan to read the next book in the series as well.

"I want you in my bed. Or yours. I don't have a preference, really. It could even be on the floor or a couch, standing, sitting, or lying down. It doesn't matter as long as I make us happy. I want to kiss you all over. I want to hear my name on your lips when you come apart, when I-"
Tweet