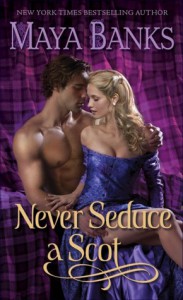 This is such a nice sweet and swoony historical romance read. Both hero and heroine are honorable and strong characters from the beginning. There is a bit of Romeo and Juliet vibe here as both their clans have been sworn enemies for generations. In order to avoid any further conflict that might jeopardize his nation, the King bestowed a marriage allegiance among the two clans.

Eveline Armstrong had been hiding a secret of her own. She is deaf after an accident whereby she was thrown off from a horse. She taught herself to read lips, but she let her family believes that she is mentally ill to avoid a marriage to Ian Hughman, a man she despise.

Bestowed by the King to wed the Armstrong's only daughter, Graeme Montgomery reluctantly accepted a wife that he believes to be mentally ill. I was looking forward to their animosity towards each other in this force allegiance, but during their first meeting, Eveline was intrigue by Graeme's low timber voice, something she had never experience for three long years and Graeme was smitten to find his wife such a beauty.

It seems like there isn't much resistance from Graeme and Eveline's part to get married, but their families from both clans were beyond outrage. I found Graeme is such a sweetheart and too honorable. Although Eveline is more than willing, he doesn't want to consummate their marriage because he thinks is not right to do that to his mentally ill wife. Is he for real? His brothers, Bowen and Teague gave him their piece of mind on this issue.

Eveline is such a strong and courageous heroine. She accepted the marriage in order to avoid conflict for her family, although she is beyond fear to put herself into the enemy clan. When she had settled into the Montgomery, she vows to make herself to be accepted into the clan. Sometimes she can be a bit naive in believing others, but I understand that she had been living in a sheltered life all this while. Before long, both Graeme and Eveline came to care for each other and they want to make their marriage work.

I love the whole Montgomery's siblings. Rorie the little sister is among the first friend that Eveline make. She is spunky and rebellious. Bowen and Teague are the ever supporting brothers for Graeme. Although they might have different opinion in regards to the Armstrong, but they always respect Graeme's decision.

Things get interesting when Graeme was attack during an ambush and Eveline is worried that it might have something to do with her clan. Is both Armstrong and Montgomery going into a war? I don't want to give anything away. But the climax did have a little twist that I didn't expect. I find this book doesn't has much conflict or intense moment. The conflict that are present is often easily resolve. That's not to say that this book is not engaging. I love both Graeme and Eveline. They didn't let the hatred among their clans blinded them. Graeme keep mentioned about heirs, I find myself can't wait to read the subsequent books just to catch a glimpse of him and his happy family. At the acknowledgement, Maya Banks did mentioned that Eveline character is inspire by her husband who has hearing abilities and learn to read lips.
Tweet