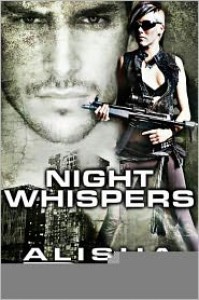 The cover really doesn't represent the story and that's totally not how James should looks like. James can be describe as geeky, genius, sweet, funny and sometimes insecure. The hero in the cover look totally alpha and badass to me.

Alisha Rai gives us a really sweet beta hero, who doesn't kick ass and hide himself in a military bunker for years. This is quite refreshing story and seems real because when he came across the Shadow aka Zombie, he might scream and yelp, but who doesn't. But when he's girl is in danger he will risk everything to save her. How sweet is that.

I was quite surprise that the story started out with James and Jules had already been communicating with each other for a year. So they pretty much had an mutual attraction despite haven't seen each other yet. When Jules keep insisting that her mission was to look for Erik, a guy who used to save her, I thought 'No!', I hate love triangle. Luckily, that's not the case.

This book had one of the funniest love scene that I came across. And it also sounds real, they don't actually do it on the floor, or kitchen top or against the wall (who actually does that btw).

For those who want to read on a beta hero for a change, do pick this up. I imagine the sequel might be on Erik, who is Jules's mentor.
Tweet