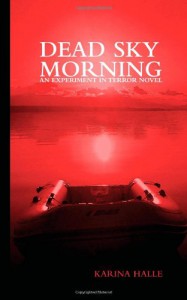 From Red Fox, we pretty much know that Perry is in love with her partner, Dex. But we can never understand what that loony guy is thinking. This started off with Dex inviting Perry to his favorite hockey game, prior the filming. Is really fun to read about them doing day to day things without all the high drama and being in life threatening situation. Everything was going great until Dex received a call and he starting to act weird and distance (didn't he always do that?). We even got a dose of Dex gross moment, he licked her face! and he brought her to a stripper club.

The mystery in this installment is surrounding the D'Arcy Island, also know as the leper island where hundreds of lepers died and buried. Most of the book take place at this haunted island with only Dex and Perry (with some ghost). Who knows even with only two of them, there can be so much drama. They spent more time being mad at each other more than usual. Perry is seeing ghost, but Dex did not and he doesn't want to acknowledge this. The creepy island gave me a 'Lost' vibe.

After a game of truth and dare, they both reveal some of their own secrets. Dex told Perry that the call during the hockey game was about Jenn getting pregnant! I was like 'What the hell?! Are you kidding me!? If that is not a total mood killer, I don't know what is. . I believe Perry's reaction is similar to mine.

In every book, we got to learn a little more about Dex's mysterious past. We found out that he was institutionalized in a mental hospital for two years, for God knows what .

Obviously, both Dex and Perry relationship had progress so much from the first book (they even got little hot and heavy this time around), but I hope he can just get rid of the annoying Jenn,although she had yet to appear in the last 3 books. How can someone make me hate them without even making an appearance? Hahah.... But with her constant name pop-up, it is annoying enough. I totally feel for Perry.
Tweet