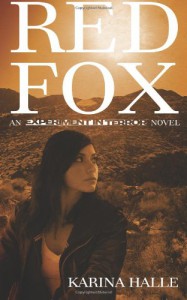 This second instalment of Experiment of Terror brings both Dex and Perry to New Mexico to confront the poltergeist at Will's and Sarah's ranch. Here we met Maximus, Dex's college buddy and also ex-band mate. We got to learn a big chunk of our mystery man, Dex, past from Maximus. We found out that Dex actually had an ex-girlfriend, who then died due to drunk driving after they had a huge argument after finding out she slept with someone else. And then from Dex reaction when Maximus talked about a daughter killing the mum, I suspect Dex might be the cause of death of both his parents. I'm just guessing.

The tension built up in this book was so thick and I'm surprise Perry still able to breath through it. Dex is as crazy as ever since he had to forego his anti-psychotic med for the weekend. When Perry said she's worried Dex might smoulder her with a pillow during her sleep, I totally believe her. My favourite Dex and Perry moment this time apart from the long awaited kiss was when Dex invited her to dance to the Billy Joe's song while singing it by her ear. So damn romantic. Who knew Dex had this trick up his sleeves. And his heroic moves to save Perry from bring rape was the most dramatic moment .

Back to the plot, Will believes his ranch was haunted by poltergeist with stone throwing and recently cattle dying. But his blind wife, Sarah was having a hard time believing in anything supernatural. Although Dex and Perry just wanted to film it and get it done, they can't seems to pull themselves away from all the drama surrounding the ranch and its native people. In the end, they had no choice, but the confront it head on. We later found out that all supernatural stuff was not due to poltergeist, instead it was caused by skinwalker, which also know as shapeshifter. Sarah actually was the villain behind all this because she hated her husband for converting to Christianity. Poor guy got himself a crazy wife.
Tweet