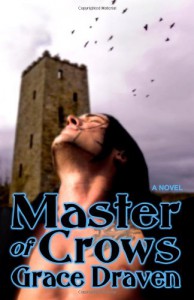 Initially this cover make me feels that the story emphasize on the sorcerers, magic, politic, battle, war etc etc, with a little hint of romance. But after I finish it, I would say this is actually a fantasy romance with heavy emphasize on the interaction between H/h.

The story started of with Silhara 'Master of Crows', a powerful sorcerer requested for an apprentice from the Conclave (imagine evil government)to help him with some deciphering. At this point, it was pointed out that Silhara was trying to battle the Corruption (imagine evil demon).

Martise was of course the apprentice that was being sent. On the surface, she was suppose to help Silhara and in return he will help her to discover her Gift (magic). But Conclave wanted her there as a spy (though she didn't manage to do much spying work). She was bind to the Conclave by some magic as some sort of slave. So in order to gain her freedom, she needed to deliver 'information' on Silhara. From the beginning, Silhara knows that Martise will be a spy because she is from the Conclave. So there is not mystery there or any doubt. What I like about Martise is that she is not an innocent young lady. She knows hardship and knows what she want in her life. When she falls for Silhara, she embrace the fact decided without a doubt that she won't betray him even though he haven't reciprocate her feelings yet. I'm not sure when it started, but I think she falls for him somewhere between learning he work manual labor in his farm without using magic or when he reveal some of his past to her. The past I like most is when he talk about his relationship with the oranges.

When I started with this book, I found it was so beautifully written and I thought I was actually reading a literature instead of a romance book. We seldom came across such beautiful writing in bodice ripper or PNR romance. But fear not, this book is not all serious stuff, there is some funny moments as well.

You know most of the time, we read about sorcerer and warrior doesn't have any actual job, beside battling and plotting. But Silhara actually own a farm of oranges and he actually work as a farmer. He had a mute servant, Gurn, who acted like his best buddy. And a smelly mutt name Cael. The interaction between Martise with his household was kinda fun to read. And not before long, Martise had already won over his household from Silhara.

The most WOW moment was during the smackdown between Silhara and Martise ex-lover boy. All I can say it, although I was shocked, it also melted my knee right there.

Grace Draven can manage to make you feel down and then straight away uplift your mood in the same page itself. The most memorable part of the story is when Silhara ordered Gurn to get him a prostitute because he wanted to stop himself from thinking about Martise too much. Then lovely Gurn reluctantly followed his ordered and get him the most expensive and high end prostitute just to piss his master off. I feel in love with Gurn right there and then. So how did Silhara response to that situation? I can't imagine he actually change her face to make her looks like Martise. But in the end she doesn't smell the same. After he tried and failed to sleep with the prostitute. He claimed that she cost them two months food and it should not goes to waste. So he gives her to Gurn instead. Hah!

The climax was Silhara working with Conclave to battle the Corruption (did I mentioned that the Corruption keep haunting him and wanted to possess him?). Martise play a role here as well, not just sit at home and wait for her hero to return or may not return.

I'm so glad I found this book, because it was not often gush upon by my fellow GR friends.
Tweet