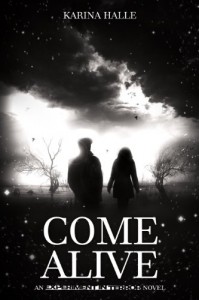 Oh my God! What did I just read?! Rating this book with 5 stars just doesn't give it enough justice. It deserve 10 freaking stars!! And when it comes to talking about Dex, I can't stop myself from using lots of exclamation marks!! Because I'm so damn freaking excited about this!!

Come Alive start right off the bat from the ending of Into the Hollow, Dex and Perry are still at the Canadian Mountains and reporting to the local authorities regarding the Sasquatch sighting and Illama massacre. But the authorities are playing it off as a bear attack. Dex and Perry couldn't care less and just wanted to head back to Seattle.

Back at Seattle, Dex and Perry was having a time of their life with their faux-honeymoon. Dex uninhibited declaration of love makes me swoon big time. Their sexy times makes me all hot and bothered. Though Perry is still quite reserve when it comes to confessing her feelings, but I guess her presence with Dex is all that matters. I'm gonna forgive give her and allow her some time to come around.

Told entirely from Dex's POV, I thought Karina manage to up her game yet again. Forget about those male's POV books that just rehash the entire story, Dex's POV give us not only clear view of his very pervy albeit immature mind, it also brings forward a new spooky adventure. I love seeing Dex so smug with his relationship with Perry that he wanted to show her to the world. I practically snorted a few times when I was being surprised by his hilarious antics. I want to shout out to the entire GR community too, everyone should read this series for this amazing man, Dex Foray!

Back to the EIT show, Dex and Perry wants their job back and Jimmy's condition was to have Maximus on board as their producer. "Oh fuckity fuck fuck." My sentiment exactly, Dex. Seeing Dex acting all irrational towards the Gingerhead was as expected, what I didn't expect was to see Perry asking Max to fuck off too. You go, girl! I'm back to being Team Perry, just for this. I love all the name calling that Dex came out with, there is such an originality to it. He put the word 'asshole' to shame.

The reluctant trio set of to New Orleans to shoot some voodoo, but what they didn't expect was to be embroiled in a local zombie mob attack. We met Maximum's ex-lover, Rose, who had some special or weird abilities like Dex and Perry. Maximus' true identity and past was finally revealed. Not much shock factor here, if you already read the Old Blood's novella. But after reading about his relationship with Rose, I developed a little soft spot for the man. Thank God, he didn't try anything with Perry anymore. Or I might castrate him myself. By the way, there is even a little reference to the Devil's Metal series.

In the meantime, Dex was having some really creepy dreams about non other than his dead mother. When Maximus and the local Mambo witch reveal some of the ugly truth that Dex had to face in regards with Perry, I wanted to cry, to shout and to wrap him up on a cocoon to protect him from the outside world. I'm so damn freaking upset about the situation!

While dealing with my emotional turmoil, we were treated to an all time epic climax. I thought this was by far the most intense climax ever in EIT series. Oh, Dex! I wanted to jump into the page and save him. I'm practically holding my breathe while reading this. Oh, gosh. I think I did hyperventilate.

I'm always the kind of reader who over-worries and paranoid about a bad ending. But I assure you, the ending was so damn GOOD! As what Dex said, I had such a big grin that threaten to split my face into two. This book makes me laugh, snort, cry, sad, hyperventilate and so damn freaking happy. Karina didn't even need a cliffhanger to make me willing to sell my soul to read her next book like right NOW! Oh, just in case you are wondering, I'm imagining her man, Scott MacKenzie as my Dex.