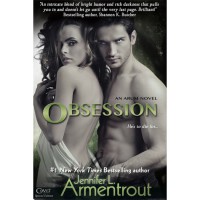 After going through 3 of the Lux's books, I finally came to Obsession. Phew! Actually this can work as a standalone as well, though I'm very familiar of the Luxen and Arum world after going through the Lux series. And of course, I met the amazing Daemon, the teenage heartthrob that makes me goes all mushy inside. Okay, back to Obsession. We met the Lux's sworn enemy, the Arum. Hunter is an Arum who worked for the Department of Defense and I can't wait to see his POV in this war that both Lux and Arum engaged in. In war, there is not right or wrong, it depends on which side your in. I'm sure Hunter had his own righteous reason for killing Luxen.

We were thrown into the suspense right from the get go. Serena met her bff Mel at the bar, where Mel went all bat shit crazy with government conspiracy and witnessing her lover turning into a glowworm. Despite not believing a thing she said, Serena help Mel out while she is in a mental breakdown. After Mel met her demise, Serena was thrown into a mess that she couldn't quite get herself away from. After being target by assassination, she had to entrust herself under the protection offered by yet another alien, albeit a very sexy one at that.

Once Hunter make his first appearance I'm instantly intrigue. He is this angry and cocky Arum who often seems to be in this 'I don't care' and 'I don't give a fuck' mode. Why is he working for the DOD is anyone guess. When the DOD summoned him to babysit Serena and dig out the information from her, he is more than pissed yet he did comply. Babysitting a human is never in his to-do list. Despite his constant grouchiness and urge to kill, he doesn't believe in war or any of the alien politics shit. Hunter is one sexy mofo, I have to give him that.

Serena appears to be mostly in hysteric in the early half of the book, which I can totally understand. Aliens living amongst the human, that can give anyone a mental breakdown and apart from that her life is also being threaten for the information that she had. She can be such a damsel at times, but she didn't make any stupid decision that make me cringe, mostly she make some self-righteous decision that I couldn't help but admire her for it.

There is a part that I found really amusing is whenever Hunter make out with Serena, she will ended up knocked out for a day or two. She definitely wants to jump his bones, but she didn't want to end up comatose or even worse, dead. Hah! I'm wondering how are they gonna work that out. Needless to say, the sex scenes are hot. I'm so glad we have this adult version of Lux series.

Hunter had a fellow Arum friend name, Dex. When I heard Dex name, I instantly got the butterflies. LoL. The name had such an effect on me. I'm so doomed. Our dearest Daemon also made a small appearance and the scene was very spoilerish for the ending in Opal.

This is one amazingly written standalone adult PNR. We got the humor, action, romance and a nicely wrapped up HEA. But I don't want this to be the end of Hunter and Serena. I am hoping there will be some collaboration in future between Luxen and Arum and wouldn't it be nice that Daemon and Hunter to work together and bring down the Daedalus? It will be totally awesome and kickass.
Tweet