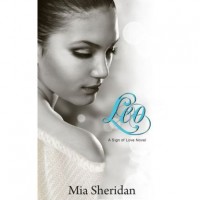 I finished this book 2am yesterday feeling all mushy inside and fell asleep so contented. The plot of this book is not overly intricate, it mostly revolves around both the heroine and the hero only. At 90% I started crying (is the good kind of crying that makes me all gooey inside, instead of anger kind of cry), so I guess is a damn good book. But what I like most of some of the details and questions from the beginning were all address by the end and I feel everything was woven beautifully together, including the past and present chapters.

Evie met Leo in their foster home since she was 10 and to her he is her everything. Unfortunately, Leo got adopted when he was 15 and had to move away with his new family. They made a promised to seek each other out when they reached 18 to make a life together. The prologue alone depicting their vows to each other really got to me. The author makes me feel that they are soul mates in just one chapter.

"I'm going to kiss you now, Evie, and when I do, it's going to mean that you're mine. I don't care how far away from each other we are. You. Are. Mine. I'll wait for you. And I want you to wait for me."

Eight years later, Evie is now working as a housekeeper at the hotel, while part timing in catering. Initially, I thought why make her out working at such a low end job, but it all makes sense for her circumstances. I really admire Evie for how she make a life for herself after foster home and had some really great friends around who are very supportive of her. Although is so cliche as they said, but I totally love her gay friend, Landon and also Nicole.

"How many people do you think walk into their apartment at the end of the day, small and simple as it may be, and look around and feel like one of the luckiest people in the world?"

She had never heard from Leo again since the day he left, she wondered all these years what happened to him. I love all the flashback of Evie and Leo's childhood together. You can't help but fell for the teenage Leo. The answer finally came when a strange man albeit a handsome one was stalking her and after confronting him his motive, she was told that he is Jake, a friend of Leo, who had passed away during an accident.

Although distraught with the news, Evie decided to put Leo in her past. She started seeing Jake and felt an instant connection with him. Things move quite fast between them and they soon fell head over hells in love with each other. This might sounds like such a lame insta love, but when I read it, I don't feel that way at all. Everything just seems so natural between these two.

Jake appeared to be such a perfect guy, he is funny, caring and totally swoon worthy. But you can't help feeling that he is keeping some secrets from Evie and it had something to do with Leo. Jake appears mysterious at time that keep you guessing and unable to put the book down. What is his deal? What is his connection with Leo? Should we trust him when he explain about his ex-girlfriend? Why does he keep wearing back his T-shirt after sex? With all these question swirling in my head, no wonder I can't sleep until I finished it.

There's more that I want to say and gush about, but I'm afraid is gonna be rather spoilerish. But I am in no way talking about the ultimate spoiler (the reason of Leo's disappearance). Here goes

Since the beginning when Evie felt being stalk, I instantly thought that it must be Leo. But it seems too easy. After Jake introduced himself and later on as they spent some time together, I'm even more sure. There are just too many hints around for us to pick up on. From the way he is so possessive of her at time to his lovelorn expression that he changed instantly. And his reaction when finding out Evie is a virgin totally sealed the deal for me. So I guess that makes this reading experience so much better compare to not knowing and thought this is some kind of twisted love triangle.

For a new adult book, I'm surprised with the lack of angst and drama. So if you are looking for a NA read with a totally likable hero and heroine (something that don't make you pull your hair out and curse like a sailor) and a suspenseful plot that keep you engage, I think this is the one.

"I had roamed the arena for far too long, roaring and bellowing, believing that I wasn't brave enough to leap through the fire. And in the end, I had jumped. And the other side was just as glorious as her eyes had promised."
Tweet