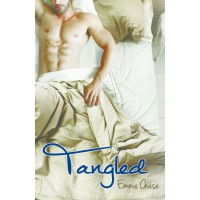 Now I know why everyone is raving about this book, while at the same time some ladies hated it. The hero in Tangled is one shameless, immature, despicable man-whore and by the end of the story I'm still not enamoured by him. But this is how Emma Chase is brilliant, you hate him, but you still love the book itself. By the way, his status as a hero is also debatable.

This book is seriously funny and don't attempt to read it while drinking or eating for your own safety. Told in Drew Evans' POV, we got inside his pervy mind and how immature a guy can be, no matter how successful they are in their career. The first chapter had me laughing so hard, that I knew this is going to be a gem. The story started off with Drew at the lowest point in his life, hiding in his apartment wallowing in self-pity for seven days. He is devastated that the first woman he ever love is marrying someone else. I was thinking 'Awww...poor Drew'.

Then we were brought back to how it all happened four months ago when Drew met Kate Brooks at a bar on a Saturday night. He keeps hitting on her, but she just brushes him off and told him she's engaged. The second chapter is dedicated to show us how he is such a man-whore that by the end of the chapter, I was thinking 'serve you right, Drew'. And because I had just done watching Crazy, Stupid, Love, I'm going to imagine Ryan Gosling as Drew. 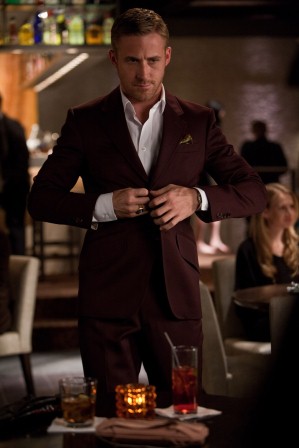 Apparently, Kate is a new employee in his father's firm, where Drew also happened to work at. Anyway, working in the same place doesn't stop him from pursuing her. Things turned nasty when his father wants them both to fight for the same client. Finally a trait that I like in Drew, when it comes to choosing between work and woman, work prevails. He is dead set on winning the client and here starts the war. Oh my, the things that they both did to sabotage each other is totally unprofessional, but we can see how serious is Drew in his work. He can't stand to let Kate take away the limelight. Drew turned from wanting to bang her, to wanting to kill her, to wanting to bang her all over again. Kate is totally driving him crazy here.

“It makes me want to kiss her and strangle her at the same time. I’ve never been into S&M. But I’m beginning to see its benefits.”

Since we didn't get any POV from Kate, and she just appeared to be a hot chick in his firm, albeit a very successful and intelligent one, I don't feel connected to her. She's engaged to her teenage sweetheart, Billy since she was fifteen. Wow. We can totally predict that she going to end up breaking up with Billy, but I had no idea how's that going happened. Her character is not very fleshed out. I also not sure whether Drew deserve her.

The supporting characters includes Drew's guy pals, Matthew and Steven and Drew's family, his Bitch of a sister and his totally adorable niece, MacKenzie. I never actually impressed by a four year old before, she did it. I bet she's turning millionaire with her Bad Word Jar.

The story itself is pretty formulaic for a romantic comedy, but the difference is the presentation itself from Drew's POV. Although I still kind of hate him, but since he had me laughing so hard, I forgive him for being an ass. If I wanted to quote some lines in this book, I will be ending up quoting the entire book. Drew gives one of the most epic and over the top grovel scene that I encounter. I'm not really into PDA, so I'm not sure should a girl be touch or totally annoyed. By the way, I heard there is also an epic grovel in The Proposal by Katie Ashley. I haven't read it yet, so I'm not sure which is more over the top. Anyway, don't take this book seriously and just enjoy the humour in it.
Tweet