Here Be Sexist Vampires (Deep In Your Veins, #1) 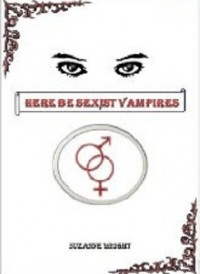 I'm glad I stumble onto AJ's review this week and dived into this book. It also helps that the sequel was already out and I can read it tonight as well.

This is one of the vampire story that doesn't take itself too seriously. Both the H/h even have such down-to-earth name, Sam and Jared. At times, I felt that I'm actually reading a contemporary instead of an urban fantasy. The vampire here doesn't sparkle, instead they each have a specific gift, think X-men. Telekinesis, psychic, Feeder, etc.. Yeah, you got it.

Sam, a Svente vampire, is Master Vampire Victor's consort. She act as his personal assassin and lover since she was turned three years ago. She had this gift of Feeder that can absorb energy from her surrounding that make Victor very possessive of her, and not in a good way, mind you. When one day, a vampire named Sebastian summoned her to tryout for the Grand High Master Vampire Antonio's legion, she only hesitate for a moment before jumping into the chance to leave her Sire for good.

On her first day at the The Hollow, Antonio's resident, she met Jared Michaels, a Pagori vampire, an arrogant sexist jerk, who thinks that women had no place in the legion, in fact, they should stay at the kitchen and bear babies. It happened that he is also the Grand High Master Vampire's Heir, thus he often act as though he's a prince of some sort. You just want to repeatedly smack his thick head.

During the tryout for the Legion, although dear Sam manage to kick Jared's ass, he still thinks she doesn't deserve a place here. Unfortunately, Antonio sees Sam potential and hired Sam as a commander to help Jared train the Legion together. Oh, you can imagine how furious Jared is now. Honestly, I'm not sure if they both fight head to head, who is gonna win. If you are looking for an alpha male that saves that day and totally kickass, you won't see it here. Sam is the one kicking ass, while Jared is taking a backseat. But it totally reminds me of Mr. and Mrs. Smith, where Angelina keeps kicking Brad Pitt's ass.

So what is Jared's charm is he didn't have chance to kick some ass? Can I say that I just love him being a totally pervy, sexist twat. He had three consorts, hear me, three at the same time. He is definitely getting into this being a future king mentality. But he showed his interest of wanting to get into Sam's pant since day one. Their constant bickering in regards to their work or non-work is hilarious, albeit kinda childish. Jared hates that Antonio thinks he needs help and from a woman.

"Whether she realised it yet or not, this betting stuff and constant conflict between us was foreplay"

"You must have been dreaming about me or something. Was it good dream? Kinky? I'll be it was kinky. Tell me about it, I'll analyze it"

Jared's gifts include telekinetic, telepathy and teleporting. Is kinda cool because he is the only vampire that can do all three. But the most fun was the telepathy, he can communicate with people with his mind and vise versa. The telepathic communication going on between Sam and Jared while in the presence of other people was hilarious.

While, Jared acting all sexist craze, Sam really wants to make herself deserve her place here by helping the squad to better control and make full use of their gifts. Initially, the squad members boycott her classes, no thanks to Jared, but later when she proves how much she can help them harness their gifts, they started to respect her. Max, even had a big crush on her and don't even care that he needs to fight with the Heir for Sam.

I just need to mentioned her assistant, Fletcher, the gay vampire. What's up with all the gay character being so adorable. We also met Evan, Jared's twin brother, not identical of course. Evan is more laid back and doesn't has the consort bullshit. Sam become close friend to Evan much to Jared's chagrin. Love reading about a guy acting all jealous.

Later on, we do learn some of Sam's past and how she was being turned. And Jared finally learned how to respect Sam and instead of acting all egoistic, he is so proud of Sam for being what she is. A borderline homicidal woman. Scratch that borderline. Oh yeah, I also need to mentioned that they have this supernatural sex scene that I bet you never read before.

"Well I love that sexist twat just because."
Tweet