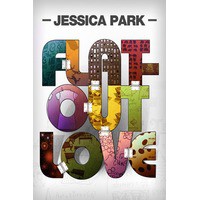 I guess everyone had read this except me. I swear I need to do a spring cleaning on my Kindle. Its simply too many books too keep track of. Flat-Out Love is a clean romance story that is funny, quirky and came with a secret that I'm dying to unfold.

Julie, a college freshman from Ohio recently moved to Boston and ended up staying with her mum's long time friend, the Watkins family. What should be a short one day stayed turn out to be longer than expected and Julie found herself got embroiled in the family secret and got attached with the Watkins siblings.

The Watkins family had a lawyer mum who teach, but never cook, a researcher who is fascinated with shrimp, an adrenalines junkie son Finn who is doing an around-the-world tour in i-don't-know-how-many days, nerdy son Matt who loves geeky T-shirt and 13 years old Celeste who communicate with Flat Finn, a 2D cardboard version of her brother, Finn.

Once I met the Watkins clan, all I can say is they are plain weird and quirky and obvious there is seriously something wrong with all of them. But hats off to them, they were all brainy. It must be the genes. First off, what's the deal with Flat Finn and everyone acting as if he is a living figure in the family. Julie was kept in the dark about the situation and expected to just 'play along'.

Matt is the fix-it-all middle child of the family. He had to take care of his sister because his parent was always not available and his elder brother, Finn is enjoying life in mosquito infested countries. He spent all his time on his sister and his studies and had zero social life. He loves his geeky T-shirt that comes with all sort of weird statement. I loves his dry sense of humor although sometimes the things he said makes my head hurt trying to understand it.

Celeste is the socially awkward little sister that everyone is trying to protect from the world. She had no friends and spent all her time with Flat Finn and talked like someone from the Victorian era.

And then we had the wonder boy, Finn. He had been travelling the world for God's know how long and doesn't seems to be in a hurry in coming back soon although his sister is missing him like crazy. Literally.

When probe by Celeste to add Finn in Facebook, Julie found herself enamored by the adventurous boy who did everything that she fear of. They spent half the book emailing and chatting with each other and before long formed deep connection. Meanwhile, Julie had also been spending some quality time with Matt, the guy who always has her back and also assigned herself the task to transform Celeste into a 'normal' teenager.

I kept figuring out why is Celeste acting the way she is, why the family seems tight lip about certain issue and when the hell is Finn finally going to show up. I've been making so many wild guesses that the book can actually come out with a few different alternate endings. Hah! And when the truth is finally revealed, I just need to scream....!!!

I thought the plot was very well written and clever, it kept you guessing what the heck is going on and I can assure you, you will keep changing your thoughts. Anyway, I simply don't understand the fascination with Facebook and the characters in this story spend all awful lots of time on it. But I can't stop myself from wanting to read their status updates on every beginning of a new chapter.

Well, I think that Goodread is Facebook's brainy cousin. Don't you agree?
Tweet